What separates great pitchers and world class performers from everyone else?

Is it raw talent? God-given ability?

Are some people just destined for greatness?

When it comes to athletic achievement, there’s no doubt that genetics play a role. We’re all born with different levels of physical potential, different predispositions and inclinations, things we’re drawn to from a young age.

For example, with pitchers, most hard throwers are born with a certain degree of congenital laxity, or looseness in their extremities, allowing for greater range of motion and whippy-ness (for lack of a better word) in their deliveries. That said, the human body is incredibly adaptable, and you’ll often see athletes’ bodies transform themselves through years of training to suit their specific activity. 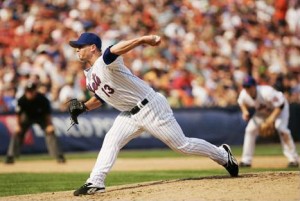 See this study on baseball players and a phenomenon known as osseous adaptation.

In today’s society we tend to romanticize the idea of God-given talent; that some people are just special, born with almost super-human ability. Yet there are plenty of cases of young phenoms and can’t miss prospects who never pan out, never achieve mastery, while pitchers like Jamie Moyer go on to pitch 20+ years in the big leagues. Bottom line, raw physical talent is not enough.

Even in The Natural, where Roy Hobbs embodies this sort of romantic hero figure capable of doing just about anything on a ball field, we get a hint of this need for more than raw talent. One of my favorite lines in the movie comes when Roy’s dad is working with his young son on his pitching and tells him:

“You’ve got a gift, Roy. But it’s not enough. You’ve got to develop yourself. If you rely too much on your own gift… you’ll fail.” 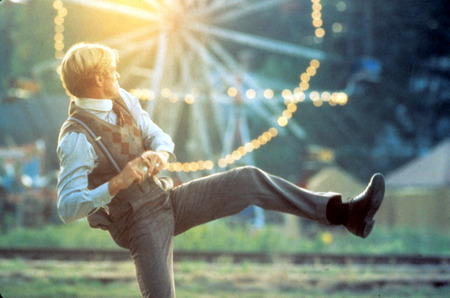 Here comes that 95 MPH heater, suspenders and all!

There’s a reason a guy like David Eckstein can make it to the big leagues and have success at the highest level. More often than not, high achievement in anything comes down to passion, dedication, and, most importantly…

In his bestselling book, Talent is Overrated, Geoff Colvin makes a compelling argument that the biggest factor for achieving high levels of success is the amount of time people dedicate to hard work. More specifically, time dedicated to what he refers to as “deliberate practice.” He provides this definition:

“Deliberate practice is characterized by several elements, each worth examining. It is activity designed specifically to improve performance, often with a teacher’s help; it can be repeated a lot; feedback on results is continuously available; it’s highly demanding mentally, whether the activity is purely intellectual such as chess or business related activities, or heavily physical, such as sports; and it isn’t much fun.”

Some Tips for Implementing Deliberate Practice:

Practice with a purpose

When it comes to practice, it’s not just about putting in the hours. Showing up is part of the equation, no doubt, but the great performers go beyond this. They determine what they need to work on improving, and hone in on that with laser focus. Spending two hours in focused, deliberate practice is a lot better than eight hours just going through the motions.

“The great performers isolate remarkably specific aspects of what they do and focus on just those things until they are improved; then it’s on to the next aspect.”
– Geoff Colvin, Talent is Overrated

One key to improving control and command of your pitches is developing an ability to repeat your delivery. It’s all about consistency. It can take upwards of 1000 repetitions to develop new muscle memory, so needless to say, that means you have to put in the work. Studies have shown that early in the learning process, part of your brain becomes very active, forming new connections. Once solidified, the newly learned activity becomes more automatic and that part of the brain calms down. This frees you mind to focus on other tasks, or aspects of your particular skill.

The importance of direct feedback

One of the great things about working on your pitching is it offer countless opportunities for direct feedback. You can see when you’ve hit your location, you can track your velocity with a radar gun, your catcher or coach can inform you about the movement on your pitches. In my last article on long toss we looked at ways that can also give you direct feedback. If you’re working on your mechanics, using video motion analysis can give you the direct feedback to make needed changes and break old habits. The key is paying attention to that feedback, making sense of it, and applying it to make your training more effective.

You need to keep pushing yourself

Deliberate practice means focusing on what you’re not good at yet, pushing yourself to move beyond your current level of skill. If you spend all your time practicing what you’re already good at, you won’t get any better. It may be comfortable, more fun in the near-term, but ultimately you’ll lose focus, motivation, and others will pass you by.

“Doing things we know how to do well is enjoyable, and that’s exactly the opposite of what deliberate practice demands. Instead of doing what we’re good at, we insistently seek out what we’re not good at. Then we identify the painful, difficult activities that will make us better and do those things over and over.”
– Geoff Colvin, Talent is Overrated

In the book, Colvin relates the story of a world class figure skater, whose training consisted of endless attempts at a particularly difficult jump, which led to repeatedly falling on the hard ice, again and again. He estimates she fell over 20,000 times in the process of mastering that jump. Not very fun. But that’s the kind of drive and determination it takes to perform at your best.

“Landing on your butt twenty thousand times is where great performance comes from.” – Geoff Colvin, Talent is Overrated

There’s a great line in the movie Hoosiers where, with his team protesting his grueling drills and calisthenics, Gene Hackman’s character tells them, “My practices aren’t designed for your enjoyment!”

As a pitcher, it’s natural to want to just get on the mound and start throwing. But you have to put in the other work, too! You have to work on your mobility, balance, stability… you have to care for your arm. You have to put in the time in the gym and running your sprints. And you need to make sure when you get on the mound in practice, you’re throwing with a purpose. Deliberate practice takes discipline. It’s about helping you become the best pitcher, best athlete, best person you can be!

One aspect of the book that gives me pause and needs addressing is the idea that achieving mastery in any field requires putting in roughly 10,000 hours, or at least 10 years of practice. This implies that you need to start young. While there’s no doubt some truth to this, it has some dangerous implications for young pitchers.

Should pitchers specialize at a young age?

My short answer is a definite NO! Here’s Why:

Burnout: I’m a firm believer that for young ballplayers, it has to be about having fun. Make it a job, or force deliberate practice on a young pitcher before he’s ready, and odds are he’ll learn to hate pitching and baseball altogether. We hear stories about how Tiger Woods and Andre Agassi were groomed by their fathers from the time they could walk, and we think that’s a recipe for success. But Agassi himself admits to having hated tennis as a young man, resenting his father, and nearly quitting. Thankfully something clicked for him, he regained his love for the game, and only when he found that love for playing tennis did he go on to his best years.

Over-use: The act of pitching places an extraordinary amount of stress on the joints in the arm. Excessive pitching at game level intensity at a young age can do damage that may never be fully repaired. Recent studies have shown that young ballplayers who pitched at least 8 months a year were 500% more likely to require surgery at some point down the road.

It limits overall athletic development: Spending a lot of time practicing a specific athletic skill is good for one thing: developing that skill. But when kids don’t play other positions or other sports, they’re never exposed to the challenges and physical demands of other sports that can play such a huge role in their athletic development.

Good athletes become good pitchers: Mariano Rivera started out as a short stop. Jason Motte and Troy Percival began as catchers and went on to become top closers. Tom Glavine was drafted as a hockey player. None of these guys specialized as pitchers at a young age, and I would bet if you took a broad cross-section of college and pro pitchers, the majority of them were multi-sport athletes as youngsters.

My point is kids don’t need to focus solely on pitching from the time they can throw, and in my opinion they shouldn’t. Yes, it helps to learn the fundamentals at a young age, and the more they practice and play they better they’ll get. But it shouldn’t come at the exclusion of everything else. By limiting their throwing to the confines of the pitching delivery and what most teach to be “good pitching mechanics,” we rob kids of their natural athleticism and hurt them in the long run.

In general, I feel strongly that kids today need to practice more and compete less. Learn good fundamentals; develop a love for the game. Practice your skills, and by your high school years, your hours dedicated to practicing needs to increase along with your focus and intensity. Embrace what doesn’t come easy and maintain a healthy mindset.

“The best performers set goals that are not about the outcome but about the process of reaching the outcome.” – Geoff Colvin, Talent is Overrated

In time, as your level of skill grows, it evolves into something deeper and you find a certain joy in your training, a fulfillment that only comes from real determination and hard work. Commit, stay consistent, and good things will happen.

The greater lesson I take away from this book… we are all capable of much more than we imagine. We have great untapped potential inside us. It’s why I first started BetterPitching.