In a previous post, I wrote about teaching pitching mechanics to Little League pitchers, and how I recommend taking a different approach with very young pitchers than with more mature athletes (you can read that post here).

What I didn’t really get into, though, is what I consider to be the biggest problem with the way most young pitchers are taught “proper pitching mechanics” these days.

I was working with a 12 year old pitcher over the weekend, and we were working on things like creating good momentum, staying fluid, good rhythm and tempo… and then something he said stopped me in my tracks.

“They’ve been teaching us to do this,” and he raised his knee up and paused. Then he separated his hands and made a “T” with his arms, all the while holding that balance position. Then he strode out and paused in the “Power Position.” Then he finished his throw…

I just stared at him. “Wow… okay, let’s talk about this,” and I began explaining that while I’m sure his coaches have very good intentions, what they’ve been teaching him and other young pitchers is not what you see among the majority of successful, major league pitchers. Which raises another question…

In theory, Yes… The mechanics used to throw with speed and power are the same regardless of the pitcher’s size and age. But expecting Little League pitchers to move with the same sort of power and athleticism you see among world class major league pitchers is pretty unrealistic (minus the rare exceptions).

So does that mean it makes sense to teach young pitchers using drills that force them to move slower?? Or would they be better off doing things that actually made them more explosive and athletic in their pitching deliveries? In my experience, many of the drills used for teaching “good pitching mechanics” to little leaguers actually work against moving powerfully like the major league’s best pitchers.

Here are the top 3 mechanical issues I see with Little League pitchers:

So what are some reasons young pitchers might have a tough time moving like their major league counterparts?

1. They may lack the necessary mobility and leg strength:
Yes, leg strength IS important for a powerful pitching delivery!
(more on this in a future post)

I highly recommend getting a full assessment by a trained Strength Coach or Physical Therapist. If you’re unable to do that, Eric Cresssey’s Assess & Correct is an excellent program.

2. They likely don’t possess the same overall athleticism:
That’s right… pitchers ARE athletes. Mariano Rivera started out as a shortstop. Dylan Bundy trains like a prize fighter, Tim Lincecum (known affectionately for his athleticism as “The Freak”) can walk around on his hands like a circus clown…

Heck, even the big overweight guys that sometimes give pitchers a bad name are usually a lot more athletic than you’d think.

3. Youth pitchers have been taught to get to “positions” rather than learning the right movements for a big league pitching delivery:
When you teach kids to get to positions, training things like getting to a Balance Point, getting the throwing arm up, and getting to the Power Position, You effectively rob them of their natural athleticism, kill their momentum, and turn them into slow-moving mechanical throwers (see this article for more on why I’m against most pitching drills).

I’m generally okay teaching these positions when kids are just starting out so they can know what that feels like. But once they get comfortable with them, the emphasis should be on staying fluid and dynamic, flowing right through those positions!

And while possessing the necessary strength and athleticism is important, a big part of developing “Big League Pitching Mechanics” is just learning the right motor coordination. This is why video analysis can be so powerful. Nothing speeds up the learning process like being able to see how you’re moving vs. the pros.

So if drills that teach getting to “positions” are bad, what do you do? 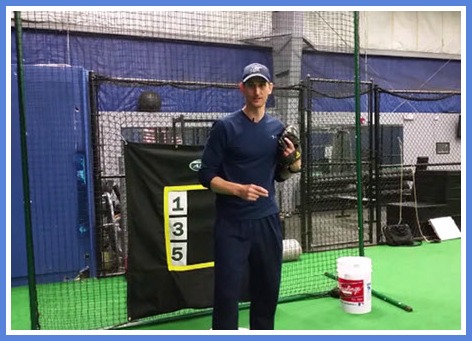