I want to let you in on a little secret.

As you know, I’m a big fan of using video with my pitchers. Motion Analysis can be a powerful tool…

When I’m working with a pitcher, I DON’T record every pitch. In fact, there might be entire sessions where we don’t look at video at ALL.

Why would I do that? How do you make any progress if you’re not constantly evaluating and assessing?

We all know those pitchers who are just OBSESSED with their mechanics.

After every throw they want to know, “How’d I look?”

Their desire – that craving for outside feedback – becomes overwhelming. And you soon get what I talked about in a recent post (what I learned about coaching from Mommy Hippo).

Video is great. But you also need to give the pitcher some space.

Give him the freedom to work on things, make adjustments, feel his way through it.

There’s a METHOD to it.

Early in the process, it can be really helpful to get a baseline.  I’ll usually show the young pitcher side by side with a pro. With a young Little League pitcher, it can make more sense to use a high-level high school pitcher – someone closer in age who’s already developed a powerful pitching motion.

There’s just something powerful about being able to look at the videos side by side.

You get those “light bulb” Aha moments where the pitcher finally “gets” it.

BUT… as I’ve mentioned  before…

The Goal is NOT to move EXACTLY like another pitcher.

Try to find a high-level pitcher that would be a good model for YOU.

Key in on what you do that’s similar… (reinforce the positive).

Then what do you see in the big league pitcher that you could get more of in your own delivery to get more powerful.

For example, here’s a shot from an initial analysis I did for a 13 year old pitcher a while back. 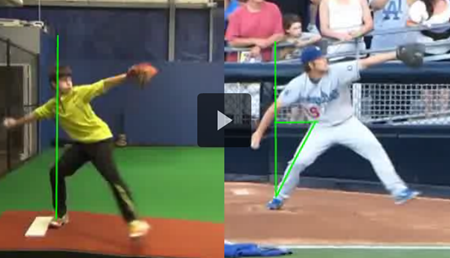 Kershaw’s not a guy I’d typically use for comparison. For lack of a better word, he’s got some FUNK in his delivery… But there was enough similar with these guys.

But what’s the big noticeable difference?

HINT: It has to do with TWO main things:

Now frankly, I didn’t need video to know these were big issues with this pitcher.

And I could have spent all day TELLING him what he needed to work on.

I could see it right off the bat.

But by letting HIM see himself – and then see how a guy like Kershaw gets his body moving powerfully – I saved myself a lot of needless (and probably unproductive) talking and explaining.

Once he knows what to work on (and has a clear image in his mind), it’s about getting to work and developing the right feel.

In the next couple sessions we barely looked at video at all… Then came time to break out the camera again for a VERY important next step.

For now, at this stage, we’re done with the big league comparisons…

We’re gonna revisit the old video… Check if he’s made any progress.

Not a finished product, of course… but in a short time, this pitcher made some really good improvement.

He could start to feel when he was getting his body moving more powerfully.

And looking at video at this stage does two big things…

It provides some solid, positive reinforcement…

He can SEE and verify the progress he’s made.

He feels good about himself… He’s learning that if he puts in the work and has the right focus, he’ll see the results.

And two, he can then turn to what he still needs to work on and how he can get even more powerful.

Here’s another short clip from that same Before & After sample.

Could he have made these improvements without using video?

But without that initial JOLT to get him out his old patterns, you can bet it would’ve taken a lot longer…

And been a whole lot more frustrating.

Hope you found this post helpful. As I mentioned, in the very near future I’m going to be releasing my new Motion Mapping Method program…

It’s going to dive deep into motion analysis and show you EXACTLY how you can use video to help skyrocket your pitchers progress.

Okay… now if you read all the way to the bottom here, I’ve got something special for you…

A chance to get this new program FREE along with a FULL YEAR of Pro Features to Powerchalk (the same program I use for all my motion analysis work).

A winner will be picked on February 9th.

That’s all for now. Until next time…