It seems like every kid I work with wants me to teach them how to throw a curveball. And once we establish fundamentals, develop sound mechanics, command of the fastball, etc. I’ll usually work with them on adding a good curveball to their arsenal. But then there are other pitchers that come to me saying they already throw five or six different pitches.

When this happens, I usually ask them a simple question: “Ok, so how many of those pitches can you throw for a strike at will?”

The answer, usually one or two.

See, you may think you have 5 pitches, but you really only have that pitch if you have the confidence to throw it when it counts. If you can’t throw that “knuckle-split” or “reverse curve” (or whatever other crazy pitch) with confidence when you’re behind in the count, you really don’t have that pitch. If a hitter knows that every time you get into a jam you’re going to be coming with the fastball, he can sit on it. Effectively your arsenal has gone from five pitches down to one pitch. And unless you have a blazing fastball or sick movement, that’s a recipe for disaster.

So this brings up another question…

How many pitches do you really need?

“A pitcher needs two pitches. One they’re looking for and one to cross them up.”
– Warren Spahn (Hall of Fame pitcher)

Always start with good old # 1: The best pitch in baseball is a good fastball, and if you’re blessed with the ability to blow the ball by every hitter you face, that’s really all you need. That’s especially true for kids at the Little League level. If hitters can’t touch your fastball, the best thing you can do for your development as a pitcher is learning to command that fastball and move it around the zone. Eventually though, hitters adapt, and once a hitter can catch up to your fastball you better have something else in your bag of tricks to keep him off-balance.

The “Jack of All Trades, Master of Nothing” Syndrome

While throwing five or six different pitches might be fun, it’s not in the best interest of your development as a pitcher. I have no problem with kids experimenting with different pitches when they’re playing catch with their friends, I used to do that all the time when I was a kid. Play like that keeps the game fun, lets you develop your own style, and you might just stumble on a particular grip that works really well for you. But developing command and consistency with any pitch takes time and focused training. So when it comes to setting yourself up for success on the mound, you’ll be a lot better off having two or three quality pitches than you would be with five or six mediocre ones.

“Hitting is timing. Pitching is upsetting timing.”
– Warren Spahn (I know I’m quoting him again, but he’s full of these great lines)

There’s no hard and fast rule for the number of different pitches you need, but here are three pitches every pitcher should have for keeping hitters off-balance: Something Hard, Something Soft, and Something That Moves. Simple, right? When you think about it in those terms, it simplifies the process. If you can command a good fastball, throw something slow to disrupt timing, and work in a breaking ball that changes planes, you’ve got every pitch that you need to be a successful pitcher.

This is going to be your fastball (the cutter falls into this category too, but your fastball should generally be your bread and butter). You can throw a four-seamer (straighter) or a two-seamer (sinks and/or tails) or both, but rule number one is always establishing the fastball. It gets on the hitter the quickest (less reaction time) and all of your other pitchers will work off of that.

Also, if you develop good command and can locate your fastball, moving it around the zone, it has a sort of multiplying effect. 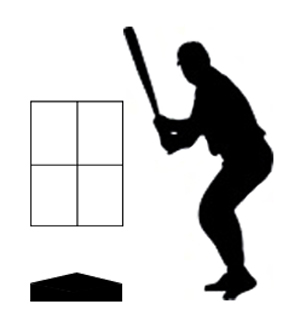 If you can throw a four-seam fastball to all 4 quadrants of the strike zone, you’ve really got four different pitches. And if you can mix in a good two-seamer that you can move around at will, you’ve just gone and multiplied your pitches again!

This is usually going to be your change-up, and it’s the best pitch you can learn for upsetting a hitter’s timing. There are many ways to throw this pitch and many different grips including the circle change, the straight change, the three-finger change just to name a few. Some pitchers have also found success with what’s called a “Vulcan change” where they basically wedge the ball between their middle finger and ring finger. For young pitchers I always recommend starting simple with either the three finger or straight change. However you choose to throw it, the main thing is picking one grip that works for you and sticking with it. That way you can develop consistency and a good feel for the pitch.

Important point about the change-up: You WANT the hitter to swing at it!

This is a deception pitch designed to get the hitter out front, taking the sting out of his bat. If you locate it well and keep it down in the zone you’ll usually get guys swinging through it or hitting it weakly somewhere. It can be tough for young pitchers to throw it with confidence this way since purposely throwing the ball slower is counter-intuitive. But as hitters adjust and start to catch up to your fastball, having a quality change-up can make a world of difference.

Other pitches that fall into the “something soft” category would be a splitter, a forkball and a knuckleball. Some pitchers have had great success with these pitches, but they’re difficult to master and many young pitchers may not have big enough hands to throw them effectively. Also, a lot of times the action on a splitter or forkball is very similar to a change-up (sinking and fading). Throwing two pitches that move the same at similar speeds serves little purpose, and again, the more pitches you throw the tougher it is to master any of them.

This is your breaking ball. Again, there are many varieties, from the old school “yellow hammer” or 12-6 curveball that drops off the table, to the slider (tighter/sharper break) to the sweeping curve and slurve (more sideways movement than the traditional curveball). The benefit of the breaking ball is it changes planes making it tough for the hitter to square it up and make solid contact. It’s okay to throw both a curve and slider, but only if they don’t interfere with each other. Because the grips and action are similar, it’s common for the pitches to sort of morph together over time if you’re not careful. If that happens, you’re better off picking your better breaking pitch and sticking with that. Generally the curve is going to be your slower breaking ball, so having that in your arsenal gives you a more varied speed differential to keep hitters off balance.

Note about breaking balls: It’s important to learn the correct way to throw a breaking ball. When throwing a curve or slider you don’t want to snap or twist your wrist. Don’t start messing around with breaking balls until you have someone who can show you the proper way to throw them. Otherwise you’re likely to develop bad habits. It’s really more about hand position and finger pressure than anything else.

Now again with these three categories, there aren’t hard and fast rules. There can even be some overlap. For instance, you might have a really nasty sinker, in which case you’ve got something hard and something that moves all in one pitch. Or you might be like Mariano Rivera and have devastating cutter that’s hard and moves (but note, even the great Mariano eventually added a tailing two-seamer to give hitters a different look).

To sum up, here are some simple rules for developing a good arsenal of pitches:

So if you’re in a hurry to learn five or six different pitches, I hope this article made you stop and think. Sometimes keeping things simple is the best approach. Don’t fall into the “jack of all trades, master of nothing” camp. Develop three quality pitches and you’ll put yourself in good position for success on the mound.

“Our idea is simple: command your fastball and change speeds.”
– Leo Mazzone