Lately I’ve been noticing a trend with young pitchers. More and more, I’m seeing kids making a conscious effort to lead with their hips.

It seems youth coaches are finally catching on to the importance of leading with the hips in the pitching delivery and it’s becoming more conventional.

This is a good thing and big step in the right direction. Part of this may be due to big name coaches like Tom House promoting the concept. 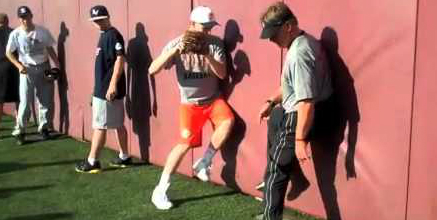 But wait, there’s a problem here!

Just leading with the hips isn’t enough – you need to lead with your hips the RIGHT WAY!

Too often, I see pitchers trying to lead with their hips by pushing their front hip out.

This causes them to lean or tilt way back in their leg lift, collapsing their back leg. Doing this can be just as bad (or worse!) than stopping at the top and getting to a “balance point.” Both will kill momentum.

The problem just comes when the pitcher doesn’t understand how to lead with their hips the right way.

The whole purpose of leading with the hips is to create early momentum in the leg lift/load phase of the delivery.

That momentum is then used to assist a powerful back leg drive, which is then converted to explosive rotational power. When you just stick your front hip out and tilt back you’re not really creating momentum at all.

What I end up seeing a lot as a result is pitchers moving down THEN out, instead of moving down AND out together (the latter is much more powerful).

Leading with your hips the right way really means shifting your weight and getting your center of gravity (think thighs to bottom of your ribs) moving towards home plate in your leg lift.

When done right, this is a gradual process where momentum builds while staying loaded with your hips over a strong back leg. You end up with a back leg on an angle rather than straight up and down.

And yes, you may have some tilt in your shoulders as you ride out on your back leg, but this is very different than just pushing your front hip out.

Here’s some video that shows what I’m talking about
Watch this video of an above average high school pitcher here. He does some things well, but notice how he exaggerates leading with his hips and sinks down before actually building any forward momentum.

(He’s only a sophomore, and he’s a hard worker so I know he’ll be able to fix this issue pretty quickly)

Now compare him to what you see in guys like Jason Motte (I have him flipped around since the HS pitcher is a lefty). Notice the early weight shift and gradual building of momentum.

Notice what you see in the difference between the two pitchers’ back legs. And most importantly, look at the path their hips take as they move down the mound.

With Motte (and most high velocity pitchers) you see the hips moving down AND out together. This allows momentum to build, leading to powerful back leg drive late in the stride phase. The high school pitcher, by contrast, moves down THEN out.

He manages to drive out pretty well, considering, but it’s nowhere near as powerful as it would be if he moved like Motte.

Think of a sprinter breaking out of the starting blocks…

Does he start with his weight back over his back foot? 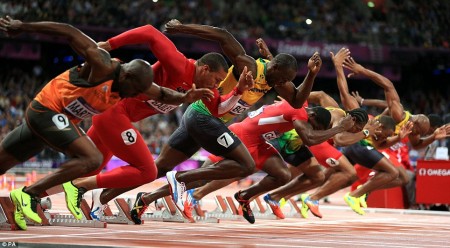 So instead of just thinking “lead with the hips”, work on creating early momentum and getting the center of gravity moving down the mound!