Ask players and coaches about the importance of a good mental approach, and most will agree it plays a huge role in a player’s success. In sports, when guys are really confident and performing at their best, we talk about them being “in the zone,” and you hear all the time about hitters being “locked in” or pitchers being “in a groove.”

But despite this wide agreement, most players and coaches spend all of their time (or at least the vast majority) focusing on training the physical side of the game.

Now don’t get me wrong, I don’t want to downplay the physical side – you can have all the confidence in the world, but if you don’t have the strength and skill to execute a pitch with power and precision it won’t do you any good.

But what I notice a lot when it comes to pitching (and sports in general) is people tend to think of confidence and a winning mindset as something innate – you either have it or you don’t – rather than something that can be worked on and improved.

When a guy has confidence, believes in himself, and is able to stay calm under pressure, they’re considered “mentally tough”. When a guy falls apart in pressure situations, he’s a mental weakling. This outlook is pervasive in sports, and it couldn’t be more wrong. In my opinion, not only is a strong, positive mental approach important, it’s something that’s fully within the player’s control and, just like other areas of his game, can be improved with practice.

The problem is most players and coaches don’t know where to begin. They may understand the importance of a good mental approach, but for the most part the workings of the mind remain a total mystery. So here’s my advice to people in this camp:

And for me that starts with self-talk. How you TALK to yourself on the mound can have a huge impact on your mental state, your focus, and your performance. When I refer to “self-talk” I really mean your inner dialogue. It’s fine to talk out loud, too, if that helps. 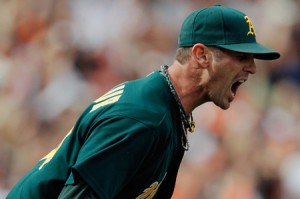 But I’d stay away from Grant Balfour “shouting profanities” approach.

Here are some simple guidelines for pitching with a winning pitcher’s mindset:

Keep it POSITIVE:
Your subconscious mind doesn’t differentiate between “do” and “don’t.” So stay away from saying things like “don’t walk this guy.” All your brain hears is “walk this guy.” Instead give yourself a clear, positive directive. “Good low strike right here!” is a good example.

Focus on what you can CONTROL:
Remember, as a pitcher, you are in control. You’re the one with the ball, you initiate the action. However, once the ball leaves your hand the result is largely out of your control. You might make a great pitch, get a ground ball, but then your short stop boots it. Or the umpire blows a call, or it takes a bad hop.

The problem arises when you place so much emphasis on the result (out of your control) that it negatively affects your approach on the next pitch. This can lead to a vicious cycle where things quickly spiral out of control. Worrying about all those other things going on around you isn’t going to help you make good pitches. So nip it in the bud and get back to focusing on what you can control (your approach and making a good pitch).

Remember this acronym – W.I.N. (What’s Important Now?):
For you as a pitcher, the answer is always the same: the next pitch. The next time you start feeling frustrated or that things are going against you, step off the mound, remember W.I.N. and get your focus back where it needs to be: your next pitch.

Have CONVICTION:
The wrong pitch executed well is better than the right pitch thrown with doubt or in a half-hearted manner. So quit trying to out-think the hitter.

There’s a great line in Bull Durham where Crash Davis tells Nuke LaLoosh, “Don’t think. It can only hurt the ballclub.” It’s funny, but there’s some truth to it. There’s nothing wrong with being a smart pitcher. But once you commit to making a pitch, you have to shut your mind off, get out of your own way, and execute the pitch.

I like Greg Maddux’s explanation of what makes a “smart pitcher.”

LET GO of negative emotions:
It’s okay to be upset if you give up a big hit or walk a batter in a key situation. That’s normal, you’re not a robot after all. The key is not to let that frustration spill over to your approach on the next pitch. Step off the mound, kick a little dirt, take a deep relaxing breath, whatever it takes to help you let go. Once you toe the rubber, you need your mind clear and focused.

Have a MANTRA: I don’t view this as a necessity, but having an expression you can repeat to yourself during a game can be a big help. Greg Maddux, considered one of the smartest pitchers of his era, said when asked of strategy, “I just focus on making good pitches.”

For Kevin Costner’s character in For Love of the Game his mantra was “clear the mechanism.” A little technical and wordy for my liking… but hey, whatever gets YOU locked in.

A simple mantra (something as simple as “EXECUTE”) can really help you focus on the task at hand.

This is just a sample of some of the simple steps for pitching with a better mental approach. In PART II we’ll dive into some specific ways you can actually Train Your Brain (like a muscle) to have better focus and clarity out there on the mound.