Following a recent post on Sloppy Glove Arm Action, I received a number of emails from people with follow up questions, so I thought it would make sense to address some of them here.

One baseball dad and coach wanted to understand why I’m not a big fan of the cue “bring your chest to the glove”, especially since my view contradicts what he’d read in a Tom House pitching book. So here’s the thing…

The first thing I pointed out to him was that, while I know it can be frustrating, it’s okay for coaches to disagree… it’s even healthy.

Constructive debate helps push things forward. I’m in danger of veering off-topic, so I’ll leave it at that for now (but please remind me if I forget, this is something I definitely need to address in a future post).

Now, I went on at length in my response to his email, but much of it echoed what I’d already written in an older post and you can check that out here:

See, for me the problem is that “bring your chest to the glove” is catchy but too easily misinterpreted… Too often, it leads to pitchers opening up early to bring their chest forward. They block themselves off with their glove arm and lose trunk rotation.

These are things the cue was actually intended to prevent!

The Glove Arm Should Be Active, Not Passive!

Now as I mention in that video on Addressing a Sloppy Glove Arm, a big issues a lot of guys run into is getting wild with the glove arm and flying open. Or in some cases, the problem is they’re not getting the glove arm into their motion at all.

So along those lines, I had another baseball dad send in a video of his son after seeing that post because he was concerned his son wasn’t “tucking” his glove arm as well as he used to. And after looking at the video, I could see why he would think that, but for the most part I actually really liked what I saw.

Here I could see a young pitcher who was dynamic and fluid. He showed good tempo and he got through his delivery well with his hips and trunk. There’s a reason this kid is pitching up with the high school at 13 years old and went 11-1 this year (which seemed like a lot of pitching to me, but he’s taking the summer off from competing).

But what about that glove arm? you ask.

The dad also showed some clips from a practice session where he was active with the glove arm but was staying closed better. With the video clip above, he’s just getting a little over-aggressive with it, causing him to leak open with his trunk. This can be very common once you get into game action and the adrenaline and juices are flowing…

But I would rather see a pitcher who’s a little aggressive (but active) with his glove arm than a pitcher who is too stiff or passive with it.

With this pitcher, he’s just a little early – it’s a timing issue and an easy fix. Show him this video after the game and he can easily work on it before his next time out there.

So how can you be active with your glove arm without flying open?

To help show you what good glove arm action looks like, I though some video clips would be helpful… They say a picture is worth 1,000 words. I personally like video even better.

Here’s a clip of a high level high school pitcher (going D1 next year) who does a great job controlling his glove arm, alongside Aroldis Chapman. 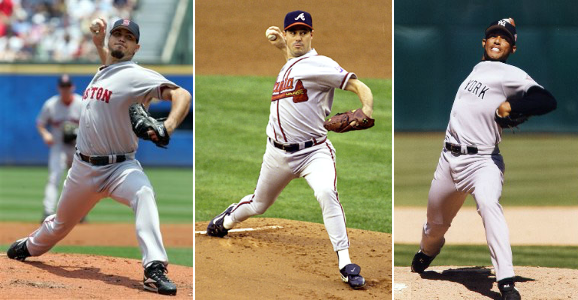 Wouldn’t you say these guys are being active with the glove arm? See how the lead elbow is pulling back a bit into front foot plant creating that stretch and tension across their trunk (core or whatever else you want to call it)?

Here are some clips of a couple pretty high level pitchers

Tough to find a better example of good timing in your delivery than this guy.

Notice also that Clemens does not block himself off with the glove. He firms up with it into ball release, but after that he just lets it go, allowing for good trunk rotation and finish.

You see the same thing here with another power pitcher, Trevor Rosenthal. Again, he’s active wth the glove arm but he firms up with it into ball release. Don’t be mislead by the fact that you see the glove drop after the pitch.

Passive or Sloppy: No Bueno.