So I worked with a new high school pitcher last night.

And normally with an initial session I’ll include a full motion analysis of his pitching delivery.

You know, to get a baseline, identify/establish anything he needs to work on…

But with this pitcher I let him know pretty early on that we would NOT be doing that.

So does that mean I didn’t use video at all?

Actually, we looked at video WAY more than I usually do during a session.

The first thing I typically do with a new pitcher (after discussing goals and going through a full warmup) is just to play some light catch.

I want to see the ball out of his hand, get a general sense of how he throws.

Every pitcher is different.

And it was funny because when I’d asked him before we got started if there was anything in particular he wanted to work on, he said:

“My glove arm. My coach has been working with me on not swinging it open.”

What do you think was the first thing I saw when playing catch with him?

I stepped aside and had him just throw to a target for a bit so I could take a quick video.

Then I asked him, “What do YOU see here in this video?”

Then we did a little focused drill work, and the difference was night and day.

I showed it to him side by side. 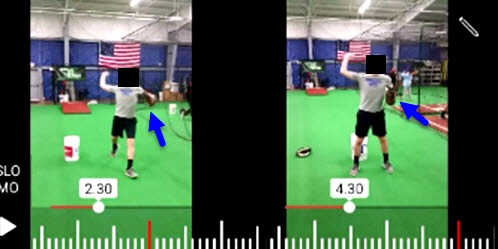 Without ME even needing to SAY anything.

Too often, we as coaches use a bunch of complicated words and it totally gums up the works.

Incidentally, he told me the coaching CUE his coach had been using for his glove arm action.

Let’s just say, not good… (and probably not the one you’re thinking of).

There are few things worse than a bad coaching cue.

Because when it get’s misinterpreted by the pitcher it only compounds the problem.

Anyway, my point here is this.

Video is a great tool.

But there’s a time and place for a FULL motion analysis.

In this case, there was some pretty clear Stage One motor learning work to do.

That aint the time for it.

But… Here’s what a lot of people miss.

Often you CAN use video during this stage and have even MORE impact on a pitcher’s progress.

It’s all about HOW you use it.

I go over all of this inside my new Motion Mapping Method program. In fact, the entire program is BUILT around this concept.

And I show you exactly how to use video in each of the 3 Big Stages along with all of the tech involved (made simple for parents and coaches like you and me).

Yesterday I opened the doors to people on the MMM Waiting List giving them the chance to get in early and grab TWO of my other programs completely f.r.e.e.

It ends at midnight tonight.